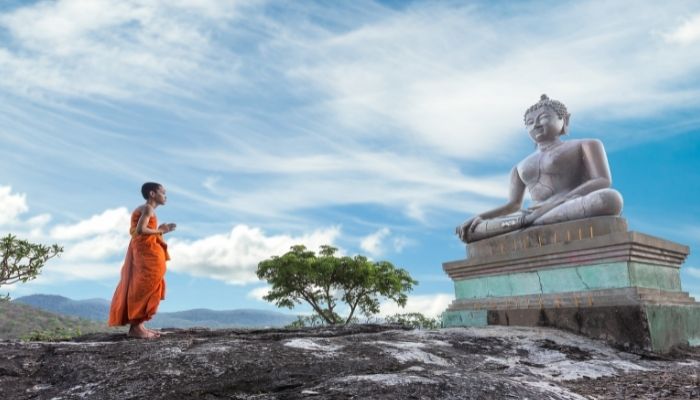 Buddhism is one of the most famous and important religions in the world. It teaches beautiful ways of meditation, spiritual development, and philosophy. The Buddha’s followers spread Buddhism throughout the globe, bringing the era of Buddhism to Magadha. Siddharth Gautam, along with his followers, was the first to establish Buddhist Monasteries in India. Buddhism’s main objective is to free oneself from suffering and the cycle of reincarnation and achieve nirvana. Around 250-500 million Buddhists are found worldwide. Many Buddhist temples, and other religious sites related to Buddhism, can be found in the various parts of India. In this article, we show you the top Buddhist temples in India. These Buddhist religious sites are essential for anyone who plans a vacation to India.

If you plan to buy a buddha marble statue and have faith in Buddhism, then Ganesh Moorti Art is one of the best options to buy a Marble statue. They have 40 years of experience and create beautiful marble statues. They export marble handicrafts and Marble statues to Budha Jaipur and anywhere in India. They prefer online shopping. They are providing free home delivery all over India. To buy a Buddha marble statue online, click here.

Mahabodhi Temple, located in Bodh Gaya, Bihar state of India, is believed to be one of Buddhism’s most sacred and important places. This is the famous Buddhist temple in India where Gautam Buddha could attain exhortation while sitting under the majestic Bodhi Tree. The temple’s beautiful architecture clearly reflects Buddhism’s diverse cultures, traditions, and customs.

This temple is established in Kushinagar, Uttar Pradesh state of India. It houses a 6-meter-long idol of the reclining Buddha. It is situated among the extensive lawns and ancient undiscovered ruins, with a circumambulatory pathway. In 1876, the temple’s 5th-century reclining Buddha was found. It depicts Gautam Buddha’s dying years and is one of India’s most renowned Buddhist temples.

Ramabhar Stupa Temple is located in close proximity to Mahaparinirvana Temple. This particular site was established at the place of Lord Buddha’s cremation. It boasts a magnificent stupa measuring 49 feet high, which is well-known for its architectural beauty. This stupa’s manifestation is very impressive and attractive.

It is one of the most unique and famous Buddhist temples in India. It was created to celebrate the achievement of King Bhumibol, a famous Thai monarch. The temple’s exceptional architectural beauty is a draw for tourists who visit it. Its breathtaking beauty and charisma are unsurpassed.

Thiksey Monastery is located on a hilltop in the north Indus River. It belongs to the Gelukpa Order. It was constructed in 1430 AD. The temple is devoted to Goddess Dorje Chenmo. The monastery complex is one of the most important Buddhist monasteries in India and contains many holy shrines. Thiksey Gompa, the largest monastery of Ladakh, is also believed to be a mini Potala Palace.

One of India’s most famous religious sites for Buddhists is the Mindrolling Monastery. It is established in the Dehradun district, Uttarakhand. This monastery’s Buddha temple is a crucial tourist fascination and an architectural marvel. It is a place to the enormous statue of Lord Buddha at 107 feet.

Ghoom Monastery, located in Darjeeling’s hilly regions of the Eastern Himalayan ranges, is one of the oldest Tibetan Buddhist monasteries. It is the most comprehensive monastery in the state. It houses a 15-foot tall statue of Maitreya Buddha. Ghoom Monastery, India’s most famous monastery, is located here.

Namdroling Monastery has a reputation as a center for preserving the pure teachings and values of Buddha. It has stunning architecture, and the prayer hall is beautifully carved with gold. It is a beautiful spiritual space. Two gold Buddha statues are found here, both of which are equally impressive in their appearance.

Rumtek Monastery, also known as the Dharmachakra Center, is located on the hilltop at Gangtok in Sikkim. Stunning views surround it. It is one of the most popular attractions in the region.

It is a significant tourist attraction in the region. This fantastic temple complex is home to the Dalai Lama. This complex also includes the well-known Tsuglagkhang Temple and the Kalachakra Temple.

Dhamekha Stupa (also known as Dhamekha Stupa or Dhamek Stupa) is a huge Buddhist Stupa located in Sarnath. This is the site wherever Buddha preached his initial sermon to his disciples after exhortation. It is a holy spot for Buddhist followers. The massive, cylindrical Stupa measures 43.6m high and 28 meters wide. This revered Buddhist shrine in India is a famous destination for many believers.

Vishwa Shri Stupa, also known as World Peace Pagoda or World Peace Pagoda in India, is one of the most well-known Buddhist temples. It is located in Rajgir, Bihar state of India. You can reach it via a ropeway. It is located on top of a hill and features a magnificent white structure with a statue of Lord Buddha in golden. This peaceful spot is a must-see for anyone visiting the area.

How to pick the right immigration consultant