What is the Role of Different Planets in Vedic Astrology? 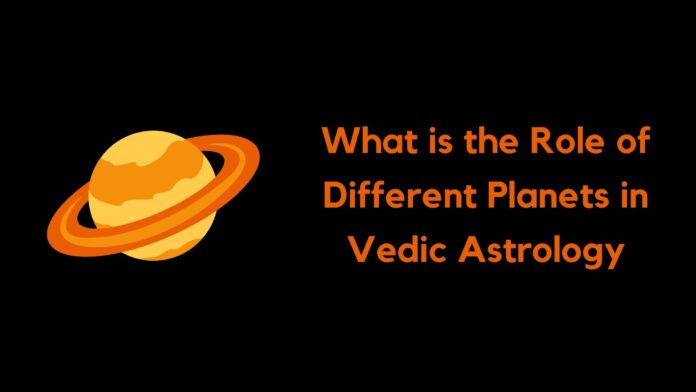 Vedic astrology, the system of predicting one’s fate based on the positions of the stars and planets, has been practised in India from the beginning of time. Astrology, which derives from the Vedas, a collection of sacred Hindu books, is still widely practised today. Many Hindus consult an astrologer Delhi before embarking on any significant life activity or facing a challenging situation.

To understand why Hindus in the twenty-first century would seriously consider worshipping planets to improve their lives, it’s necessary to know how the planets are viewed from a Vedic and astrological standpoint. The planets have an impact on the state of each chapter of our lives.

Surya (Sun): In astrology, the sun is the ruler of the individual’s self, ego, personality, and spirit. It can stand in for any other authority figure in our life. People in positions of authority are said to have an intense sun since the sun is the representative of the ruler. Strength, courage, and drive are attributes that it bestows on leaders. It’s also supposed to boost a person’s creativity and provide them the ability to overcome obstacles in their daily lives.

Chandra (Moon): The moon rules the conscious and thinking mind in astrology. It is believed to be in charge of a person’s emotions and sentiments. Moon is a symbol of any other caring female figure. It is in order of all things watery. It is supposed to have influence over the intellect and beauty and pleasures in one’s life.

Budha (Mercury): Education, knowledge, reasoning, and calculative skill are all represented by the planet Mercury. Mercury-ruled people are great mathematicians and even astrologers. Mercury is our sibling’s representative. Mercury is the god’s messenger and is associated with speech and conversational ability. It also represents devotion.

Shukra (Venus): Venus has feminine traits and is the princess of the planets in astrology. It is the patron saint of love, romance, marriage, and life’s pleasures. A good Venus is also favourable for one’s romantic life. Among the five elements, Venus represents water. In a man’s life, it denotes the presence of his wife. A lovely Venus also portrays an artistic and musically talented temperament.

Mangala (Mars): Mars is the commander in astrology because it represents violence. Aggression, fast-thinking, heroism, strength, and courage are some of the attributes it is linked with. Mars is a powerful, masculine planet with a lot of energy. It is pretty energetic and swift, and it is prone to picking fights up quickly. People with a strong Mars are prone to being fickle-minded and very eager to react to any circumstance, particularly one that threatens them.

Brihaspati (Jupiter): Jupiter is a benevolent and pleasant planet. Jupiter’s influence can help a person overcome a variety of problems. It is considered to bestow tremendous money and good fortune on a person. Suppose this planet is in an unfavourable position in the birth chart. In that case, one may be bereft of prosperity and good luck. Jupiter represents someone who serves as a teacher, mentor, or guide in one’s life. It is the source of happiness and oversees knowledge and learning. It also makes one wise.

Shani (Saturn): Saturn is considered to bring challenges and obstacles to any task, and individuals with an afflicted Saturn find it extremely difficult to achieve in any pursuit. Saturn is the planet of sickness, disease, and adversity. Obstruction, sadness, and even death are all aspects of Saturn’s impact. If a person bears the part of Saturn when they are in a terrible situation, it can lead to an early death. Saturn is thought to reward or punish a person based on his actions. Despite its negative connotations, Saturn has an integral part in spiritual upliftment, and many saints have a favourable Saturn.

Rahu (Moon’s North Node): Rahu is a shadow planet, exalted in Taurus/Gemini. Rahu is supposed to be malevolent and shares many of Saturn’s traits. Rahu has no distinguishing characteristics and absorbs the features of the planets and houses with which it is associated. As a result, Rahu’s influence can vary greatly depending on other factors. Rahu is connected with irrationality, deception, flawed logic, and other bad qualities. Rahu is greedy and craves wealth and material comfort. Rahu represents secular and worldly luxuries.

Ketu (Moon’s South Node): Ketu is another shadow planet that is exalted in Scorpio/Sagittarius; however, it is not seen as sinister but rather as a liberating power. It has a profound spiritual effect and can help a person transcend the cycle of life and death. Ketu is the god of deep penance and wisdom and the last salvation. It seeks enlightenment and seeks freedom from earthly pursuits and pleasures.

Each planet has its specific role which has its various effects in astrology. Many astrologers in Delhi will advise you to know the role those different planets in Vedic astrology play.