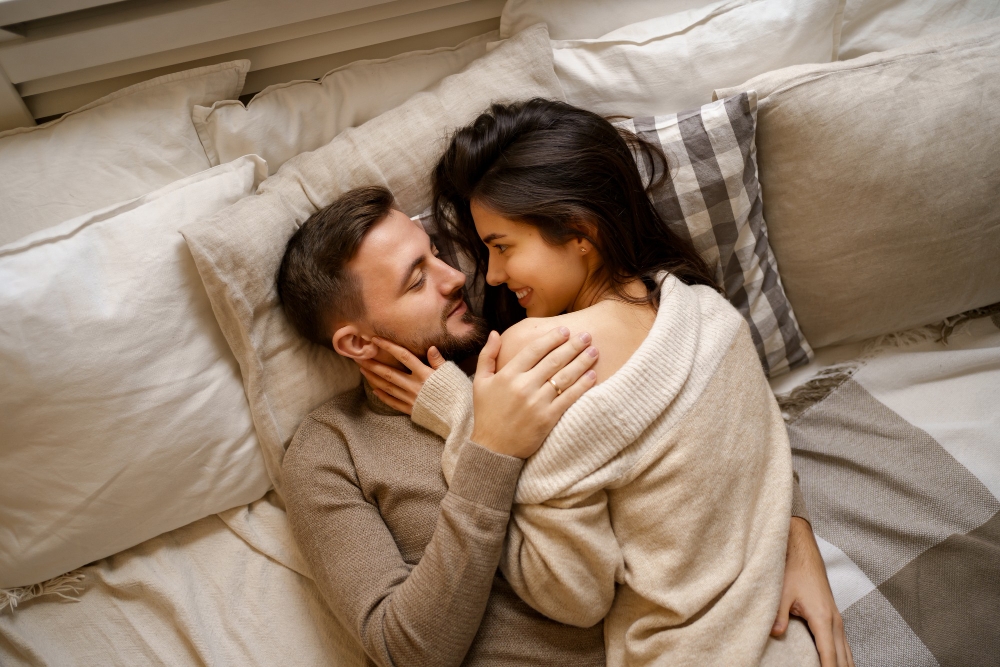 When your boyfriend or husband no longer appears to be attracted to you, it is a significant matter that requires your attention and care.It is crucial to detect whether this is happening in your relationship, as painful as it may be.After all, if you catch that spark just as it is about to go out, there is still a chance to rekindle it.

1. Going to bed early or before you:

Couples frequently prefer intimacy at night. It allows you to forget about your troubles and find peace in each other’s’ arms after a long day.

However, if you find your partner retiring to bed without giving you a goodnight kiss, that is not how things should be. But don’t just assume anything. No, not yet. He could perhaps be exhausted.Wait a few days to see if it becomes a regular pattern; if it does, he’s probably thinking about something. Happy couples prefer to go to bed together, wrapped up in each other’s warmth, and if he refuses to go to bed with you, he may also be avoiding having sex with you.

He’s talking to you in a way that sounds like he’s talking to a sibling, a friend, or a co-worker. You should be concerned if he starts treating you like a flatmate rather than a spouse. This is usually a hint that he isn’t interested in you as a sexual partner anymore.

3. Partner appears to be irritated by everything you do:

When someone is truly interested in you on a physical level, they will overlook all of your unpleasant habits.All those minor eccentricities become extremely bothersome when someone is no longer attracted to you, and they may even cause your formerly laid-back significant other to become snippy with you.

4. Your partner has not touched the other in a long time:

This does not always imply that you are having sex. Simple gestures such as kissing, hugging, or simply holding your hand indicate that a guy is still interested in you.He’s losing (or may have fully lost) his attraction to you if he recoils when you try to hold or touch him.

5. Foreplay is no longer an enabler:

The foreplay is just as vital as the final action, if not more so. Kissing, stroking, hugging, or simply holding your hand are simple clues that a person is still captivated by you. If he pulls away from you every time you try to hold or touch him, he may have lost interest in you.He’ll also try to avoid snuggling because, in the past, it’s always led to sex.

If he’s not even mildly interested in your sexual advances, he’s probably lost interest. He’ll still be open to sexual encounters part of the time even if his libido is low. He’ll merely be less inclined to initiate or accept your offer than he would be otherwise. It is one of the most common signs your boyfriend is not sexually attracted to you.

7. Takes into notice the significant changes in partner’s body:

Men are visual animals, despite what no one likes to hear. If you’ve gained a lot of weight and your boyfriend or husband has told you he’s noticed, there’s a risk he won’t find you as beautiful as he did when you first started dating.

8. Partner has not made the first move in a while:

If that sets up an alert in your thoughts, causing you to recognise that you’ve been the only one who’s been putting in the effort lately, it’s a clue that his sex drives are at odds with yours.He could be going through a period of emotional instability or be dealing with worry. Stress and emotional turmoil can discourage people from engaging in sexual activity.

When obtaining erections becomes an uncommon occurrence, this is one of the most telling indications. He should be able to get an erection on a regular basis if he is in excellent health and emotionally stable.

These are some of the very interesting signs your boyfriend is not sexually attracted to you, now it is on you how to react and take things further. Happy Relationship to all.