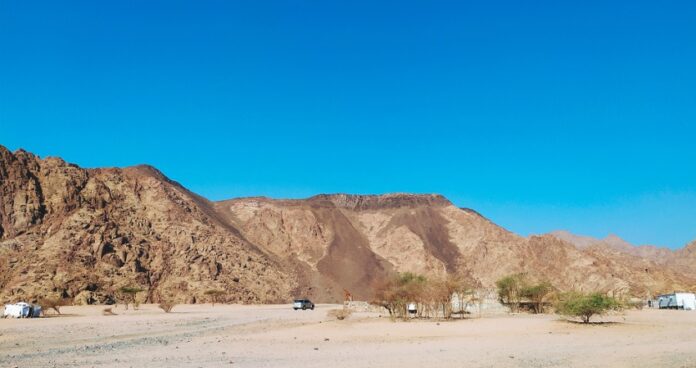 Yellow Lake Al-Ahsa: Travel to Al Ahsa in Saudi Arabia’s east and be immersed in a lush green environment that’s a world apart from meandering sand dunes and parched desert plains. Al Ahsa, located halfway between Riyadh and Dammam and extending into the Empty Quarter, is home to one of the world’s greatest natural oases as well as a UNESCO-listed city. Natural springs, surrounded by date palm trees, beautiful countryside, and even some of the best dates in the region, are interlaced with a succession of spectacular historical structures.

Al Ahsa was and continues to be a thriving land port and trading centre with a long and illustrious history. It served as a significant halt for tradesmen and merchants traveling through the region’s old commerce routes, as well as an entry point for early pilgrims traversing the Arabian Peninsula to Mecca. The region’s archaeological sites show evidence of human occupation dating back to prehistoric times, making this a history buff’s dream come true. Al Hofuf, Jawatha Mosque, and Al Qarah Mountain caverns are must-see attractions that explain why Al Ahsa holds an important place in the hearts of the locals. Here’s a list of some of the top things to do in the neighborhood in a day.

Overview of the Yellow Lake Al-Ahsa

The Yellow Lake is one of the Gulf’s lakes, situated to the east of the town of Omran in Al-Ahsa. It is one of the Gulf’s lakes with a historic name given by residents of the Arabian Peninsula’s east. Because the region is bordered by sand dunes, accessing the site is currently challenging, necessitating the usage of four-wheel-drive vehicles. Various desert plants flourish around the lake, including fern, which grows abundantly around its margins. Migratory birds flock to Yellow Lake Al ahsa twice a year from colder regions such as America, Russia, Iran, Canada, and India in search of warmer temperatures. These birds range in size from giant geese and ducks to songbirds and tiny birds.

Activities Tourists can Engage in

Bird hunting and fishing are prohibited

Attractions around the Yellow Lake

Ibrahim Palace is worth a visit

Begin the day in Al Hofuf, Al Ahsa’s commercial centre, which features a wonderfully renovated market as well as old town. Here, tourists will discover Ibrahim Palace and, from across the road, the House of Allegiance, wherein residents swore their affiliation to King Abdul Aziz Ibn Saud, the foundation of modern Saudi Arabia.

Ibrahim Palace is indeed an architectural wonder that was built in the first Saudi kingdom. It served as a military base and then as a garrison headquarters, integrating traditional Islamic and military elements. Explore the ancient Al-Qubba mosque, as well as the restored halls and a small museum brimming with relics, pictures, and other exhibits. The museum is available to the public for free, however, the hours of operation may change, so double-check before time.

Take a tour of the Jawatha Mosque

Take a diversion to the Jawatha Mosque, which dates back to the sixth year of hijra and is believed to be the earliest mosque built in Saudi Arabia’s eastern province. It is reported to be the very first in the kingdom to offer Friday prayers outside the Prophet’s mosque in Medina, originally constructed by the Bani Abd al-Qays tribe who lived nearby. While the majority of the mosque’s original building is gone, the underpinnings have been meticulously renovated to enable five daily prayers. Everyone is invited inside.

Climb to the summit of Al Qarah Mountain

Spend the afternoon admiring the breathtaking views atop Al Qarah Mountain. It’s a rather straightforward climb to the summit, a little over 220 metres, and well worth the view. The cliff is made out of limestone, which gives it an off-white colour, and a honeycomb of tunnels, nooks, and passageways weave their way through the boulders, waiting to be discovered. To get as much out of the visit, hire a local tour guide, and also don’t forget to visit the museum before leaving.

Visit Al Ahsa’s vibrant, busy Souq Al Qaisariya as the sun sets. This open-air souq, which dates back to 1822, is one of the kingdom’s oldest markets and a sensory overload. More than 420 establishments provide a range of traditional handicraft, fragrances, oils, spices, and native scents in its maze-like passageways. Visit the famous Al-Said tea and coffee cafe to recharge on Arabian coffee while watching the souq vendors go about their business.

Staying the night in a castle is a unique experience

There are several hotels in Al Ahsa. The Al Koot Heritage Hotel is a boutique hotel with magnificent architecture, a cluster of pleasant rooms, and genuine local accents. The Al Ahsa InterContinental, which is designed like a 16th-century castle and has tastefully equipped rooms, is a five-star luxury option.

Visit the best natural attractions at Al-Ahsa today to indulge in the magical experience that Saudi Arabia has to offer!

Everything You Need to Know About New Caravans For Sale